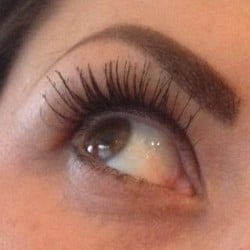 Since going public about her experience with semi-permanent make-up, the most commonly asked question has been ‘did they hurt’.

She had already experienced tattooing of which she said: ‘Yes it hurts, but it’s not the insane torturous feeling that so many people imagine; it’s bearable’.

No pain no gain, perhaps, for semi-permanent eyebrow tattooing?

In actual fact, having my eyebrows tattooed was painless.

Painless and feelingless, as the numbing cream rendered my eyebrows and forehead an unflinching canvas for my artist Claire Hobson to work on.

She had her eyebrows tattooed at SkinViva’s Castlefield skin clinic in Manchester.

The tiny defined hairstrokes are clear and even though my forehead is pink, it’s not sore.

According to Niamh’s review, the most difficult aspect of the treatment appears to have been the advice not to get the eyebrows wet while they heal and to avoid the temptation to scratch at the itchy skin.

After the ten days is up my eyebrows were no longer scabby and dry looking but in fact, defined and darker as I had wished.

It might seem like a lot to go through just to have a defined eyebrow shape, but for somebody who previously spent a painstaking fifteen minutes in front of the mirror every morning it’s a welcome procedure.

Claire Hobson is a highly popular semi-permanent make-up artist who’s worked on many celebrities. Her popularity means that there is a 6-month waiting list for direct clients, but SkinViva have a series of dates agreed with Claire, enabling people to see her much earlier.

Claire is known nationally for her work with semi-permanent eyeliner, lips and eyebrows and has treated a number of celebs as well as featuring in national press such as The Daily Mail.

Please contact us to book your consultation with Claire: call 0161 865 1141, email contact@skinviva.com.